Screening of Santiago Rising at Boomtown Fair in Winchester, Hampshire (UK), which runs from 10-14 August 2022.

The documentary will be shown on Sunday 14 August at 11am in the Reel News Speakers Corner tent.

Boomtown at its heart is a living theatre with a long history and an ongoing narrative, hundreds of characters roaming the streets and guiding the citizens through the labyrinth of adventures waiting to be discovered.  Each chapter delves even further into the mythology of Boomtown, with endless stories for you to be part of and make your very own.

The film will be followed by a Q&A with director Nick MacWilliam and other speakers.

For full information on the three-day festival programme and tickets, visit the festival website.

Screening of Santiago Rising at Green Gathering Festival in Chepstow, Wales, which runs from 4-7 August 2022.

The screening takes place at 9pm on Thursday 4 August and will be followed by a Q&A with director Nick MacWilliam.

Join us for four days of low impact living in an area of outstanding beauty, every nook and corner bursting with music, comedy, creativity, campaigns and natural abundance. The original off-grid festival, we’re 100% powered by sun, wind and people.

Have a party…then wake up and put the world to rights. Take the festival spirit home with you.

*NEW DATE: Due to the current Covid situation, this screening has been rescheduled from Saturday 15 January to Saturday 5 March 2022.*

Screening of Santiago Rising at the Cube Cinema in Bristol.

Grab a seat for this on-the-ground and dynamic feature documentary that details, in thrilling images and interviews, the massive protests in Chile in 2019 that lead to Chileans voting to replace Pinochet’s constitution with one drawn up from representatives of the people. Historic. A-must-see film about direct and diverse action for social justice, equity. greater participation and against neoliberal, totalitarian and unjust systems of power.

After the film there will be a Q&A with director Nick MacWilliam + Matthew Brown (Author and Professor of Latin American History at Bristol University) + others TBC.

Screening of Santiago Rising at the Rich Mix in Shoreditch, London, as part of a day of Latin America-focused documentary screenings organised by Alborada Films.

The screening will be followed by a Q&A session with director Nick MacWilliam and Manuela Mendoza (Asamblea Chilena en Londres).

Screening of Santiago Rising at FACT Cinema in Liverpool.

The screening will be followed by a Q&A session with director Nick MacWilliam.

Fewer Than One, Sheffield, UK

Screening of Santiago Rising at Fewer Than One in Sheffield.

The screening will be followed by a Q&A session with director Nick MacWilliam and Sheffield-based activist María Vasquez-Aguilar of Chile Solidarity Network. Chaired by filmmaker and Alborada founder Pablo Navarrete.

There will then be a social in the venue’s bar area with DJs.

Screening of Santiago Rising at the Chapeltown Picturehouse in Manchester.

The screening will be followed by a Q&A session with director Nick MacWilliam, then a social in the venue’s bar area.

Screening of Santiago Rising at the Kino-Teatr in St Leonards-on-Sea (East Sussex).

The screening will be followed by a Q&A session with director Nick MacWilliam and St Leonards-based Chilean activist Rosanna Leal of The Refugee Buddy Project.

Screening as part of the Kino-Teatr’s DocFest 2021.

Tickets via the Kino ticketing platform. 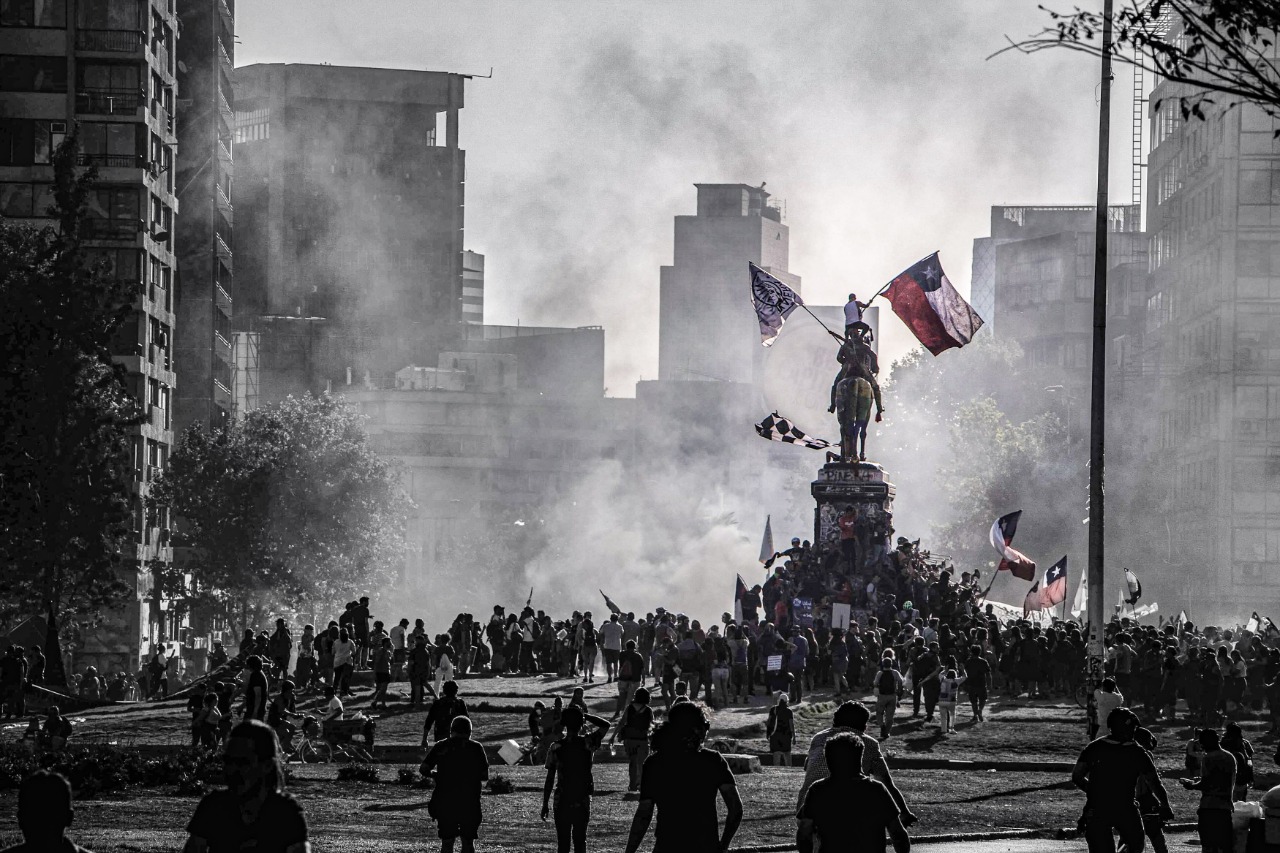 *25% of ticket proceeds will go to Los Ojos de Chile (The Eyes of Chile), a foundation to support some of the hundreds of victims of eye injuries committed by Chilean police during protests*

Once you have purchased a ticket, you will receive an Eventbrite link from Alborada Films five hours prior to the the film screening, with a password and viewing link. This will be active from 6.30pm to 8.30pm on Thursday 14 January 2021.

You will also be sent instructions regarding how to access the live Q&A that will follow the screening. Please email info@alborada.net with any questions.

We have priced tickets into five bands based on how much you earn. The idea is that the more money you have, the more you pay. This is so everyone can access our event at an affordable price, while ensuring that the project remains financially sustainable.

The film charts the build-up to the historic vote, in October 2020, that saw Chileans vote for a new people’s constitution to replace the one imposed during the brutal Pinochet dictatorship. It examines how a movement which began as a high school students’ protest over transport fares evolved into one of the most significant events in the country’s history.

Filmed during the weeks after protests began, Santiago Rising meets social movements, protesters and ordinary people in their struggle for equality and human rights.

The film emphasises the creative element of Chilean protest, as music and art play a prominent role in expressing political dissent. We also see the state’s attempts to crush the protest movement through a brutal police crackdown.

Although the odds are stacked against them, Chileans find strength in unity as they aim to overcome Pinochet’s enduring legacy.